This seventh edition of our Engineering Spotlight series highlights the career of Margaret Jean, of our Moog India Technology Center (MITC) in Bangalore, India. Margaret joined Moog in 2001 as a contract employee and came onboard as a permanent employee in July 2002. She has spent the last twenty years building a fantastic career, while greatly contributing to Moog’s culture and success.

Margaret’s interest in engineering and aerospace was shaped at an early age by her father, Antony Thomas Jean. An Aeronautical Engineer by profession, he spent his career working in the Simulation Division at Aeronautical Development Establishment (ADE) for the Defense Research and Development Organization (DRDO) of India. The DRDO is an agency headquartered in Delhi tasked with research and development for the Indian military. His work on light combat aircraft inspired her, as well as his passion for math. Even during her Masters studies her father would guide her through statistical analysis. He had a passion to teach and mentored anyone in the family who came to him for advice. You might say engineering runs in the family!

Margaret attended Anna University, in Tamil Nadu, for Engineering and Computer Science. During her time at university she worked on a project with her father, designing a head-up display (HUD) system for a helicopter, utilizing what she’d learned in Computer Science about software development. The HUD system projects data onto the pilots helmet for easy  visualization so pilots can continue to look forward when flying, versus down or to the side.  She also interned for several months in the Simulation Division at ADE.

Life in the Workplace

Graduating in 1997, she applied to many aerospace companies. She had enjoyed her engineering project and her learnings from her interaction with the scientists at ADE and decided to look for a job in the field. She was hired by Ak Aerotek in Bangalore as a Project Engineer. Ak Aerotek collaborated with a company in Birmingham, UK, called TRW Aerospace (now Lucas Industries), and she spent some time there working on the Rolls Royce Trent 500 Electronic Engine Control System. After 18 months at Ak Aerotek, Margaret had an opportunity to move to the U.S. and work as a consultant. She’d long dreamed of going to the U.S., and she seized the opportunity and in 2000 moved to Boston, MA. It was while consulting in Boston that she had her first interaction with Moog.

The Moog Salt Lake City location came across Margaret’s consulting information and contacted her, offering her a position in the Software Division. A year later, in 2002, she was hired as a full-time engineer in the Verification and Validation Group, where she worked as a Sr. Engineer on various commercial programs until 2005 when a personal obligation required that she move back to India. Moog being a company of strong values and culture, fully supported her need to move to India. They accommodated her with a position as a Sr. Engineer and temporarily stationed her to work out of the Industrial Group’s Sales Office at Bangalore. The Moog leadership team envisioned a technology center in Bangalore, and Margaret’s move supported this vision. The Software Group was the first group that started its operations in Bangalore and she started off as the first Software Engineer at MITC. She handled several challenging tasks such as establishing the software base, hiring additional software engineers while working as a sub-contract manager responsible for software development and verification and validation for rotorcraft systems.

Throughout her time at MITC she has designed, developed, tested and certified software for the first generation processors for platform software along with various tool qualifications that are DO-178B compliant. Until 2015 she was part of the Software Group (now Flight Software). In 2015 the Test Software Group was created, which involved an organizational change to bring the Test Equipment Software Group under the umbrella of the Software Group. Margaret is now in charge of this group, responsible for all commercial programs involving production support and new designs. It was a big changeover for her because it involved a new style of working; learning the challenges in the new business, handling different team dynamics, and creating partnerships with cross-functional groups  across sites. She says, “you must be on your toes at all times, keeping the test equipment up and running – delivering on time. And if test equipment goes down, creative thinking, problem-solving, and rapid decision making are keys to providing an immediate solution and we come together as a team to make this possible.”

Test Software is a daily challenge and continuously evolving with tremendous efforts to incorporate stringent processes and best practices. Margaret is in charge of maintaining these processes. Technical reviews and meetings take up most of her days, and even evenings are typically busy with calls to accommodate communication with other Moog facilities in different time zones. One of the rewards of the position is mentoring and molding the 18 engineers that report to her. She’s watched them grow as she conducts one-on-one meetings and talks through problems to find solutions.

Upon returning to India, she completed a Master’s degree in Engineering and Technology Management, online, from the University of Colorado, at Boulder. She’s been able to leverage that degree to assist her in the techno-managerial job at MITC, along with supporting the site’s university association. She is the site’s presiding officer for Prevention of Sexual Harassment (PoSH), assisting in incorporating best practices and is responsible for the site to be compliant to GOI, SHWW Act 2013. The main principle of the act is that "no woman shall be subject to sexual harassment at any workplace and every employer is under obligation to have a policy against sexual harassment and constitute an Internal Committee (IC) to inquire into sexual harassment cases.” Since 2018, she’s also led the Diversity Equity and Inclusion (DE&I) initiative for MITC, and she sits on the Moog Corporate Council for DE&I.  She attends many conferences to support these programs and is also certified as a Diversity Professional from DTUI, California. She believes in continuous learning and says, “It is key for success”.

When Margaret is not leading her engineering team or various on-campus programs, she enjoys spending time cycling on her road bike as well as maintaining it. On a typical Saturday you will find her doing a 60 km ride, sometimes in a group, but typically solo. She also rides a motorbike and is a member of the woman’s biking group in Bangalore known as Bikerni Bengaluru. Reading is another hobby, and she enjoys legal thrillers by John Grisham and crime thrillers by Sydney Sheldon. 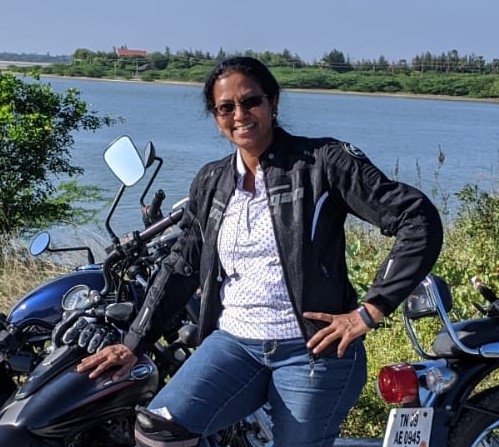 Margaret says, “Every individual is unique and each individual’s talent must be recognized, valued and nurtured. When you are in the position to groom individuals it is important to play the role of a consultant, counselor and cheerleader. Give them a little nudge and the best things will come out of them.” She credits learning this from her father who had the ability to foster and grow the individual talent in those around him. Lastly, she says that even today she follows the principle her mother, Emma Jean, instilled in her at a very young age “Set a goal in life and work hard to achieve it. Don’t rely on the support system that you may or may not have, but instead rely and believe in yourself, for self-motivation and drive must come from within.” If you’re interested in finding out how to become a part of the Moog team and experience growth opportunities like Margaret has, visit our Careers Page today.