This is a sidebar for Issue #3.1, which discusses the general effects of machine capability and measurement system accuracy (MSA) upon the additive manufacturing (AM) laser powder bed fusion (LPBF) process in Moog’s Additive Manufacturing Center (AMC).  This article explores modeling techniques for the AM machine capability within a computer simulation of the LPBF specific energy density (Ed), using statistical Design of Experiments (DOE), and comparing this approach to the more traditional Monte Carlo and Sensitivity analysis methods. 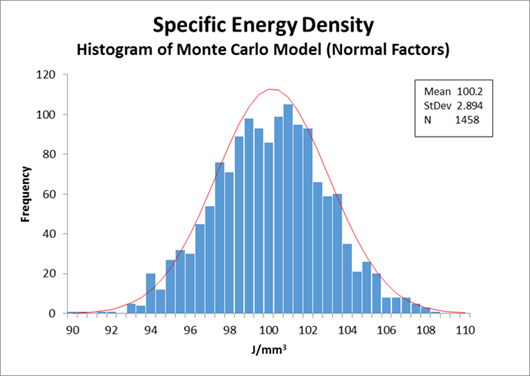 The histogram above represents effects from multiple sources of machine capability error upon the Ed of the LPBF AM process.  At Moog, we have refined an equation-based coarse lumped-element model of Ed into a more detailed version that accounts for effects from the machine’s optics and other machine-specific settings; machine capability assessment (MCA) studies have been conducted in the AMC to quantify errors in the AM machine settings, and this information can be used in computer models to estimate the contribution of machine capability to process error.  With normally-varied inputs based on MCA studies, the histogram shown above…as generated by a Monte Carlo Simulation (MCS)…indicates that the Ed can vary from the targeted setting by approximately ±9%.

The refined Ed model may also be studied through DOE to complement MCS, with the various process inputs exercised through an experimental matrix, and the model output Ed response analyzed through ANOVA (Analysis of Variation) and main effect and interaction plots instead of MCS output sensitivity analysis (SA).  In this particular case, there are several advantages of using DOE for this model to understand the effects from uncertainties:

·         The limitations imposed on DOE in the physical world (uncontrolled noise, limited samples due to costs, the need for replication and blocking) do not apply

·         Using the Taguchi Robust Design ([1] Please see the links under ‘Additional Resources’ at the end of this article) approach, the components of variation can be studied simultaneously with process design parameters, with the uncertainty factors assigned to the outer-noise array.

·         The output of a DOE-based computer simulation is often times more intuitive than MCS, which is important for the understanding of fellow stake holders and the decision makers in management

There are also several limitations to be aware of when using a DOE approach instead of the MCS:

The way to get around the first disadvantage is shown below, and for the one-sided parameters, the only solution possible is to include these parameters in the unassigned variation, and allow the factor setting to vary randomly following a Gamma or Weibull distribution.

EQUATING THE DOE OUTPUT TO MCS

It is necessary to correct the output of a DOE to that of the MCS.  This correction may be performed either at the inputs (DOE factor level settings) or at the outputs (DOE response) using identities that I have taken from electronic signal processing (see the sidebar).

The histograms above show the MCS Ed model output on the left (Fig. 2a) DOE Ed model output the right (Fig. 2b). Notice that the model’s DOE output (run in a 3-level full factorial matrix) has a standard deviation (highlighted) of 7.086 J/mm3, which is about 245% greater than that of the model’s MCS output (with all parameters varied normally) with a standard deviation of 2.894 J/mm3 (highlighted).  Using the signal-processing identities in the sidebar, we can show that this difference in variation between the two model outputs can be equated.

Relating these two distributions 1-to-1:

Checking the two distributions from the model outputs:

Therefore, in the example above, the output of the 3-level DOE model is approximately 245% wider than a MCS using the same factors varied with random normally-distributed input, and to translate the DOE output variation to equivalent MCS output, the DOE must be rescaled by 1/2.45 (40.8%).  For this example, the adjustment could also be made by reducing each of the input factor level separations to 41% of the expected spread from the lack-of-capability of each factor setting. This approach will allow the variation in a system to be modeled using DOE, which will output much more information than a MCS, but still allow the output spread of the DOE-based model to be related to the equivalent MCS output without the need to run a separate MCS. I have found that this comparison is necessary in order to answer the inevitable questions that come up about what the MCS output would look like. Again, the DOE approach works for this specific Ed model, and the limitations discussed previously need to be accommodated.

EXERCISING THE DOE MODEL WITH AN OUTER NOISE ARRAY

A much more effective way to model the effects from machine capability and other uncertainties on Ed is to combine the uncertainty variation with a parameter DOE using the outer noise array of the Taguchi Robust Design method.  In this case, the AM factors in the Ed model may be changed across their full range, using either a full or fractional factorial matrix (the inner design array), while at each response output from the model, another matrix is run with each of the AM factors exercised by the MCS-equivalent DOE matrix (the outer noise array), with noise factor separations adjusted to 41% of their expected variation as discussed in the example above.  The noise factor level adjustments will vary based on the distribution equivalency desired between the factors and the MCS output (using the signal identities in the sidebar).  This approach is really a DOE (design) within another DOE (noise), where each output response from the inner design matrix is perturbed by the MCS-equivalent outer noise matrix.  The experimental results provide insights into which combinations of AM process factor-settings resist the noise-array perturbations to Ed (i.e. exhibit robustness).

Typically, for physical real-world experiments, the combined inner-outer noise array can be very expensive to run, and practically…when studying the effects from machine capability on Ed …it is impossible to actually control the settings of the outer noise array, which is why we have used computer-based models to study these effects.

When actual experiments are planned in the AMC, the proposed DOE matrix can be run through the Ed model with the outer AM machine-capability noise array, in order to gain insights into process design strategies.  It is also interesting to note that typically, the model predicts approximately 15% to 20% residual error in the process Ed because of the outer noise array, which correlates with the noise floor we have encountered in our actual physical experiments with process output responses

By: George Baggs
George is a Systems Engineer at Moog Inc., working in the Space and Defense Group at Moog’s East Aurora, NY location