Space is hard.  The space environment offers engineering challenges that don’t really have a lot of similarities here on the ground.  The hardware needs to survive the ride on a rocket that accelerates from stationary to over 15,000 miles per hour in a matter of minutes.

Space hardware must operate in a vacuum and can be subject to temperatures that have a wider range than found anywhere on Earth.  Depending on where in space, radiation can damage circuits and cause electronics to fail before they ever had a chance to operate and cause computer reboots akin to a galactic “blue screen of death.”  And all the while this hardware cannot be serviced.  There is no maintenance person to go flip a switch or jostle something loose if it is stuck.  But that’s okay since we know how to design and test hardware that can survive all of that.  In the last several years the advancements in miniaturized electronics, high power density batteries, standardization, and low cost manufacturing have dramatically brought down the costs of small spacecraft hardware.  This is no different than the advancements that have allowed smart phones to be more powerful than the Apollo module and fit in your pocket (not to mention low cost cameras, sensors, GPS receivers, memory cards, etc…).  The costs are low enough that small spacecraft can be built by universities, high schools, and even elementary schools.  Governments are starting to embrace these low cost spacecraft as budgets shrink while the utility of space keeps increasing.  What was once the domain of a few governments and companies that could afford upfront investments over a hundred million dollars is now becoming available to many more countries, companies, and small groups of individuals in what is called the “democratization of space.”

One area that remains consistent is all of these spacecraft and payloads need to get to space somehow and right now there are only a few options with large rockets that range from the $10M to over $400M depending on the size and flight requirements.  Several companies have started development of small launch vehicles that will cost below $10M but that is still out of the range for high schools and universities and these launchers are not operational yet.  Another option of space access for small payloads is called Rideshare which has many similarities with transportation here on Earth such as a train, bus, airport shuttle, or even ridesharing apps like Uber and Lyft.  The concept is the same where a passenger shares in the costs but isn’t responsible for purchasing the actual transport vehicle.  This concept can be used to get spacecraft and payloads into space using unused space somewhere on the launch vehicle  fairing.  Commercial companies offer this as a service that charge by the pound and agencies like NASA may give away these spots for free for educational or scientific purposes.  One way to use rideshare is to take advantage of the regular resupply missions to the International Space Station (ISS).  Right now there are small spacecraft on the ISS built by high school or college students or startup companies that are going to be deployed into space by astronauts.  How cool is that?

One disadvantage to rideshare is as a “secondary payload” in exchange for the low cost you often don’t get to specify the particulars of where you go in space.  Options like ISS deployment come with additional safety precautions because astronauts are handling the spacecraft and payloads can’t risk their safety.

This is where Moog’s Orbital Maneuvering Vehicle (OMV) comes into play.  The OMV leverages an existing piece of the rideshare infrastructure with the EELV Secondary Payload Adapter (ESPA).  The ESPA is designed specifically to take advantage of excess capacity on large rockets such as the Falcon 9, Atlas V, and Delta IV and has successfully launched on all three.  The ESPA structure provides a place to mount small spacecraft and payloads and can be used underneath a “primary payload” or can be built up in a stack of several ESPAs.   The ESPA has been used in both these configurations and there is even one on the Moon from the LCROSS mission.  The ESPA can be stacked as well to carry many payloads.  Moog recently had a stack of three of them launched in December for the OG2 mission.

The OMV goes one step further by installing a propulsion system inside the ESPA along with the required power, avionics, and various sensors that allows this to be a “free flyer” that can move these small payloads around in space.  This is particularly useful for getting to orbits that aren’t readily available through rideshare (such as beyond Earth orbit) or when several payloads need to be dropped off in different locations such as in constellation phasing that may take days or months.  Another advantage is the OMV can support the payloads once getting in orbit and act as the platform for propulsion, pointing, power generation, communication, and data processing in what is called a “hosted payload platform.”  The OMV can be part of a “hub and spoke” architecture where several small payloads relay data back to the OMV that then transfers the data to Earth.  This allows for smaller and less powerful radios on the small spacecraft that otherwise couldn’t be achieved in a way to allow for useful data rates.  This architecture is also useful in “disaggregated architectures” that allow for many small spacecraft to do a particular task or mission instead of one or two large assets.  The idea here is many several small spacecraft performing a mission is a more resilient system than a single asset which is important for defense systems.  Moog is even looking a smaller version called the Small Launch OMV (SL-OMV) that can be used as part of many of the small launch vehicles in development. 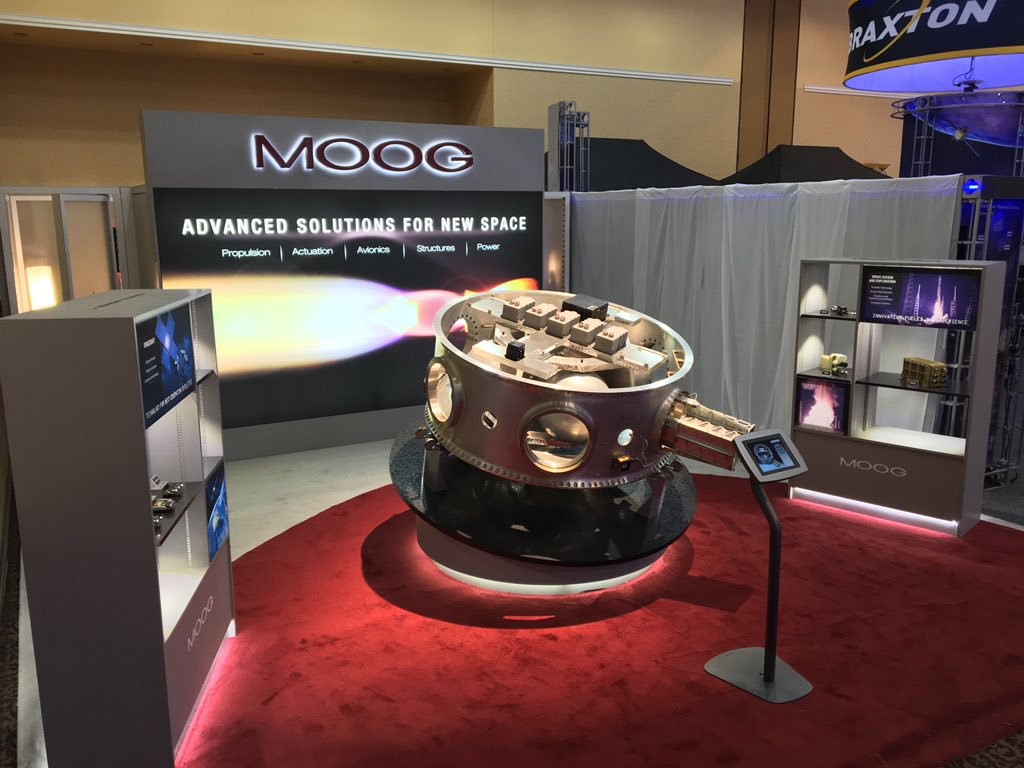 The OMV development project has been nearly full time for two years but over the last six months or so Moog engineers have been traveling and presenting the OMV and what it can do to a wide variety of potential users.