Moog Industrial Group has been selected by Bombardier Aerospace, Belfast to supply an aerospace test system to undertake a full-scale structural test on the CSeries* aircraft advanced carbon fiber wing.

The system will be used to carry out fatigue testing of the composite structures of the wing. This testing forms part of the CSeries aircraft certification test program. Bombardier Aerospace, Belfast, which is responsible for the design, manufacture and assembly of the CSeries aircraft advanced composite wings, has manufactured a wing to facilitate the fatigue tests. This is similar to the production article, but without the wing tip, systems and control surfaces.

Developed to satisfy Bombardier’s rigorous approach to test article safety, the test system is comprised of a Moog-designed and manufactured products including an Active Load Abort System, an upgrade from a 12 to 24 channel Aerospace Control and Monitoring System, Machine Controller and Structural Test Actuators with Servo Valves. Each actuator is equipped with a specially designed Active Safety Manifold, which forms part of the overall Abort System controlled by either a G761, or a high flow D661 servo valve, depending on the location of the actuator on the wing structure and its specific flow demands.

The Active Load Abort System is a cost effective, independent multi-channel safety system that delivers a new approach to test article safety. In the event of a primary loading system failure, this Active Load Abort System uses a Moog Machine Controller to synchronously unload the structure over a common time period, while maintaining the desired load distribution. The System will protect the test article preventing undesirable and unrepresentative loading being applied to a unique test article, which has already accrued valuable fatigue testing hours.

Moog was selected for this work because of their previous proven long-term relationship with Bombardier and its new safety management system which meets Bombardier’s requirements as part of an essential secondary control system that will provide an extra level of protection to the test article.

The test system is currently being commissioned at Bombardier’s facilities in Belfast, prior to fatigue testing getting under way.

* Trademarks of Bombardier Inc. or its subsidiaries 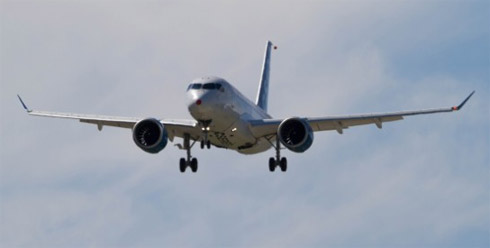 For press inquiries, pleas send an email to: