Moog Meets the Challenges of Rules Changes in Formula 1

Moog Industrial Group has been working with their global Formula 1 (F1) customers to help them meet the challenges of 2014 Fédération Internationale de l'Automobile (FIA) rules changes. Formula One cars are the highest class of single-seat auto racing that is sanctioned by FIA and are the most technologically advanced racing cars in the world. These new technical regulations encourage F1 auto designers to focus on new technologies, that are more relevant to road cars, and in particular techniques of improving fuel efficiency.  Moog is able to help teams meet these challenges through their range of sub-miniature hydraulic F1 products and systems for actuation, supporting completely new systems on this season’s cars such as brake pressure limiting and turbocharger waste-gate control.

The key advantage of hydraulics in motorsport applications is the high ‘power density’ of the technology.  This is illustrated by the ability of very small and light actuation devices to deliver extremely high power levels. Integral to Moog’s range of products is an ultra-light weight Moog E024 Servo Valve, weighing just 92 g (3.24 oz.).   This servo valve is crucial in the conversion of signals from the car’s Electronic Control Unit (ECU) into hydraulic flow providing the motive force of the actuators, and can control up to 2.8 KW of hydraulic power from an electrical signal of just 10 mA.  During the 2014 season, a typical F1 racing car will contain up to 8 variants of this product, as well as servo hydraulic actuators, pressure limiting valves and power assisted steering valves.

Martin Jones (Business Development Manager – Motorsport) said: - “Moog has been at the forefront of sub miniature actuation in motorsport since 1982, initially supplying active ride height equipment to Team Lotus for use on their Lotus 92 Formula 1 car. Over the intervening years, Moog has developed a range of products and systems for actuation in many types of motorsport including Formula 1, World Rally Championship (WRC), Moto GP, Touring Cars, and Le Mans prototypes, often drawing upon technology originally developed for use on airplanes”.

Moog’s miniature motorsport products have been successfully applied in other markets with similar demands, in particular autonomous robotics and downhole oil and gas production and exploration. 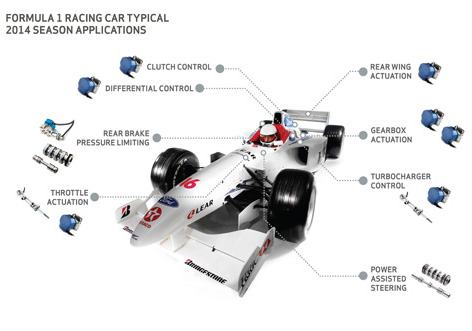 Oil and Gas Products and Solutions