One of the most important services Moog offers is the ability to customize its products to improve machine performance and provide solutions to motion control problems that our customers are facing. This requires an advanced knowledge of system design and machine applications, as well as experience in designing and building precision products. One example of this capability is the process of customizing the spool null cut in Moog’s Servovalves and Servo-Proportional Valves. It is a critical process for customers as this customization provides for the highest performance and precision of motion control. While many engineers are aware of the importance of the precision of the spool cut they may not be aware of the process Moog application engineers use to define a null cut configuration to solve system or machine problems.

Critical center spool valves, also called “Axis cut or Zero overlap valves,” are the most popular valve configuration for high performance Moog Servovalves. This describes a product where the spool lands align with the edge of the ports so that the control flow is zero at null and there is no dead band in the null region. Axis cut valves are suitable for position control servo systems because they deliver seamless control flow to an actuator and give higher pressure gain, leading to increased actuation stiffness. 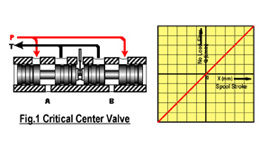 The axis cut valve may not be suitable for some applications. One example is a servo system that is not stable due to poor damping. Another involves situations where there is a strong requirement to save energy and the null leakage of the axis cut valve is unacceptable. In these situations, other null cut customization options are available.

Open center spool valves also named “Underlapped valves” describes a product where each edge of the spool does not fully cover the corresponding control port in the null position. When the valve is at null this arrangement results in a flow from the supply port, across each control port to the return port. 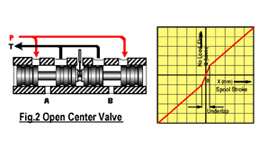 Underlapped valves may be suitable in the following cases:

On the negative side, this null cut configuration increases the null leakage with a resulting energy loss. This can be minimized by using so-called load sense systems, which unload the supply pressure during the no-load condition when the valve is at null.

Closed center spool valves, also named “Overlapped Valves”, describes a valve in which the spool land overlaps the edge of the port and completely block the ports in the bushing, when the valve is centered. 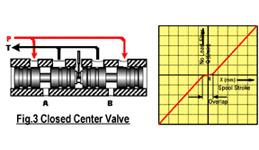 This is not commonly used in critical servo systems because of the negative effect of the resulting dead band, but the following are some conditions where there are advantages to using this form of customization: 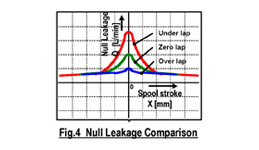 A Dual Flow Gain Valve is another kind of customization where the valve has a non-linear characteristic curve. Typically, this valve has lower flow gain in the null region permitting higher system gain, but beyond a certain flow the higher flow gain permits high speed traverse. Typical examples of the application are electric discharging machines and material handling robots.

Nobuhiro Ohtaguro has worked for Moog in the Pacific for over 30 years. He started his career as an application engineer and progressed to Engineering Manager in Moog Japan. He also worked in Australia and Singapore as a Special Project Manager for 3.5 years. Today he provides technical advice and training to the engineers in the Pacific Moog subsidiaries.