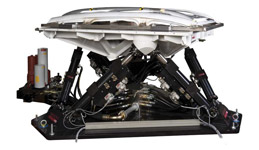 If you've ever had to carry bicycles, skis or even a surfboard on the roof of your car, you likely know the Swedish roof rack maker Thule. For those who've hauled bikes or luggage on a road trip, a strong, reliable roof rack is indispensable equipment. And now Moog FCS is helping to make that even more so.

Moog FCS' work for Thule is all about ensuring their new products are every bit as dependable as its existing ones. So, in February 2008, Thule - the world's leading supplier of car rack systems - picked Moog FCS to supply a test rig, a very special one. The test system simulates the conditions Thule's products face when fastened to the roof of a car. Whether you're racing to the beach with a surfboard strapped to your Thule roof rack, or facing buffeting winds in a mountain pass with luggage atop your SUV's rack, Moog FCS' test rig simulates the twists and turns of the road.

Moog FCS delivered its test rig just in time for Thule to throw open their doors to a new test facility in Hillerstorp, Sweden. Moog FCS' test system will occupy a special place inside the facility that Thule's worldwide operations rely on to ensure the quality of its products.

Thule needs to establish that its car roof rack or box stays firmly attached to a vehicle and that it stays in one piece. So, among other things, Moog FCS will be testing the product's clamping device as well as the rack or box.

Tests are done with the clamping units attached to a car roof provided by the OEM. According to Thule Technical Group Manager Fredrik Larsson, car makers are increasingly calling for sustainability tests on the original equipment.

Reflecting on why Thule chose to work with Moog FCS, Larsson said, "We liked their technical solution. They were very easy to work with, and their expertise in testing helped us to develop our approach.

Moog FCS delivered Thule the complete test rig, including a Multi-Axis Shaker Table (or MAST), unlike any on the market. Moog FCS' design stemmed from work it had done with flight simulators. Rather than building a conventional orthogonal system, which has a table moved by actuators mounted on its base and sides, the Moog FCS HexaTEST MAST is a six-legged hexapod. The hexapod has two equilateral triangular frames set one above the other, offset at 30 degrees. Each apex of the top triangle is connected to the two apexes below it on the lower triangle via Moog FCS actuators.

Along with the MAST, Moog FCS supplied the seismic mass, hydraulic infrastructure and safety system. Moog FCS also provided the data acquisition set-up, including the control cabinet and operator software.

Moog FCS examined what the competition could do in terms of acceleration and displacement as a benchmark, and set out to beat its competitors' performance specifications. While the hexapod is a proven technology, Moog FCS is the first company to use it in this kind of application.

Moog FCS developed the HexaTEST MAST over four years. The system has six degrees of freedom (DOF) wherein the table moves in the x,y and z axes, with pitch, roll and yaw. It's complex to control each of the individual degrees of freedom because a movement along a single axis involves the use of all six actuators. All the actuators have to be controlled exactly in terms of speed and time, and this is tricky when the table has to vibrate at frequencies between 0.8 to 80 Hz.

As for the hexapod's advantages, there are many. MASTs need to be anchored in a "seismic mass," a massive concrete block that contains vibrations within the apparatus. The smaller the MAST, the smaller the concrete block needs to be. The hexapod MAST can operate in a space three to four times smaller than competing designs. Even so, the block for Thule's hexapod weighs 88 tons. The new unit is also less costly to maintain than orthogonal designs because its six actuators are alike, so spare parts cost less.

For the MAST to run at very low frequencies, the seismic mass incorporates "active level control." Air springs under the MAST automatically activate as the mass begins to resonate, compensating for its motion. The MAST can vibrate with amplitude of over 140 mm along its axes, while maximum rotational displacement is +/- 10 degrees. It supports loads of up to 990 lbs. And it can run continuously for several days, a period equivalent to hundreds of thousands of road miles.

In the weeks since buying the test rig, Thule has already carried out several simulations.

"We are very happy with the test system; it's compact, clean and very simple to use," said Larsson.

For example, all of the system's hydraulic hoses are embedded in the concrete floor. The system provides flexibility, too. Tests are currently done at ambient temperatures. But the rig can operate at various temperatures if Thule decides to install a climatic room. And if Thule does needs additional support with its newly deployed Moog FCS test system, Larsson isn't worried.

"If we do run into trouble, Moog FCS has people close by in Gothenburg. We know we can count on them to quickly come in and help out," Larsson said.

In addition to testing roof racks, Moog FCS has sold its MAST to examine passenger and industrial vehicles. Moog FCS supplies a number of large OEMs throughout the world with testing solutions. In general, Moog FCS excels in developing applications that require engineer-to-engineer collaboration to provide a leading-edge solution. Moog FCS' work for Thule is simply the latest chapter in a collection of stories about innovative testing.

Pim van den Dijssel is Market Development Manager, Test at Moog FCS based in Nieuw Vennep, Netherlands. He is responsible for developing the aero and auto test businesses in Europe working together with his colleagues in Asia and America. He holds a Bachelor degree in Industrial Automation from the University of Utrecht, Netherlands, and has over 15 years experience in aero test solutions.