What is K&C testing?

The vehicle suspension is a complex mechanism that consists of links, joints and bushings (elastics bearings). Basically, the wheel has two degrees of freedom; in vertical direction, to cushion road obstacles, and in steer direction, to change direction. The other motions are therefore constrained. This is referred to as the kinematics of the suspension. Since the suspension contains elastic elements, it will deform under influence of external forces and moments. This is the compliance of the suspension.

The general concept of K&C measurements is to separate the kinematics and compliance properties for the different degrees of freedom. For example, consider a vertical motion test. The wheel is moved vertically within the full stroke of the suspension. The longitudinal and lateral forces as well as the aligning (steer) torque are controlled to zero. In this way no reaction forces can be built up in the suspension and therefore the constrained longitudinal, lateral and steer motions are measured. The K&C Test System is able to control each degree of freedom in position or force mode.

The measurement set-up consists of the vehicle which is fixed to the ground and thus cannot move. The wheels are standing on individual platforms that can move and rotate in six directions or degrees of freedom. The wheel contact force and moment, the platform motion and the wheel motion are measured. A motor is connected to a steering wheel so it can be steered and the steering torque is measured. 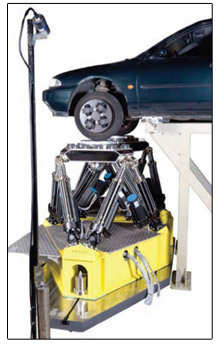 The K&C Test System consists of the following components:

Load cells
The hexapod platforms are each equipped with a six axes load cell to measure the forces and moments applied to the wheels.

Optical position sensor system
The system is equipped with two cameras, each focused on a side of the vehicle and optical targets fitted to the wheels. The positions of these optical targets are measured by the cameras so the motion of the platforms and the wheels can be determined. Both cameras are connected and measure in the same frame of reference with very high accuracy.

Application software
The application software runs on an operator computer and it manages all the tests. The tests are defined and the appropriate commands are sent to the control system which performs the test. The measurement data is collected from the control system and stored in a database. The test execution can be monitored on-line and measurement reports are generated automatically. By using templates for the tests, a standard test suite is defined but specific tests can be easily created as well. The application supports interaction with the operator for entering additional data and asking for confirmation on-line during test execution. This feature is also fully customizable.

Single closed loop controller settings
The control system uses one set of parameters which is suited for all types of vehicles. There is no manual loop tuning needed. This makes the system very user-friendly and easy-to-use.

Optical position sensor
The position sensor uses optical targets which are fitted to the wheels with magnets and two cameras beside each hexapod. An automatic calibration procedure is used to determine the alignment properties of the targets with respect to the wheel and is accounted for automatically in the software. Since there is no mechanical contact between the sensor and the vehicle, the sensor does not influence the measured positions.

Automatic vehicle set-up
Once the vehicle is mounted, the K&C Test System determines the vehicle position and orientation with respect to the rig and automatically compensates for the actual vehicle position. The set-up procedure only takes about two minutes. The entire process to be ready for test, including mounting of the vehicle, takes approximately 20 minutes.

Involvement in International Standardization
In January 2009, the sub-committee ISO/TC22/SC9 - Vehicle Dynamics and Road-Holding Ability of the International Organization for Standardization (ISO) decided to form a new Working Group to develop a K&C Standard. This Working Group is formed by international experts in the automotive industry. The objective of this new working group is to standardize the K&C measurement process and analysis, independent of the type of test system and measurement principle. Moog is actively involved and the author is the convener of the Working Group.

Erik Kuiper is an Application Engineer at Moog in The Netherlands. He holds a Master of Science degree in Mechanical Engineering from Delft University of Technology and has over 8 years of experience in the automotive industry.