New Welding Process for Jet Engines of the Future

When a world-leading developer of advanced manufacturing processes decides to develop friction welding to a point where it can be viable for securing the blades on jet engines, it stands to reason that any partners it chooses will have a similarly robust pedigree. Aiming at producing a machine that would be the biggest in the world and change your business out of all recognition, you know from the outset that the people with whom you find yourself in harness are going to need matched abilities and complementary skills. Joining forces with such a partner will give you confidence that the result of the project will be more than the sum of its parts. 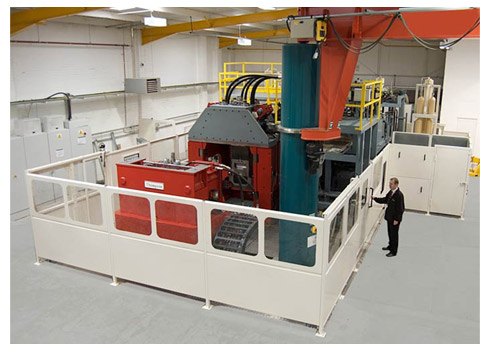 That's exactly what happened when UK firms, Thompson Friction Welding (TFW) in the West Midlands engaged Tewkesbury-based Moog to work towards the production of the world's largest linear friction welding machine. The machine in question is the E100, based at the Thompson facility at Halesowen, West Midlands. The key challenge faced by its developers was that never before had the friction welding technology been used with such required accuracy at the high frequency. The desired specifications for the finished product were: 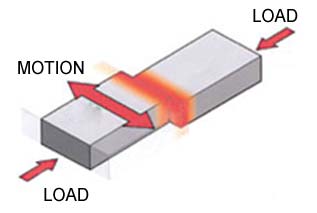 TFW has been developing advanced manufacturing processes for a wide variety of industrial components for more than 40 years. In that time the company has supplied more than 550 machines worldwide, and has established an enviable track record of bringing friction welding process innovations to market - mostly rotary friction welding techniques and machines. But rotary techniques are not suitable for all components, so the development of this impressively proportioned linear machine was the logical way forward when the TFW people were deciding several years ago how to expand the business.

To begin with, TFW bought a company specialising in linear friction welding, and that was the company's route to market in terms of credibility, making sure that the Thompson name was linked to that process. Then TFW looked for a team of people who could design and build the proposed piece of kit. What was needed was expertise in servohydraulic systems, and hydrostatics. Trawling the marketplace, including a linear friction welding company in the US, eventually led to 'a shortlist of one, and it was Moog,' explained TFW managing director Alan Shilton. 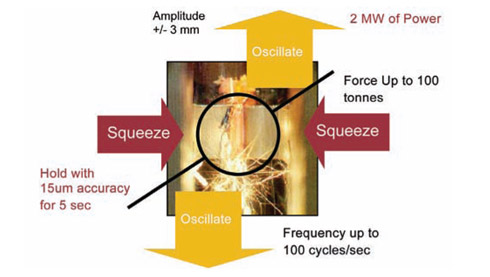 It was clear from the start that the two companies gelled; they had similar philosophies. 'As a business, Moog was up for the work,' said Shilton. 'They were positive in their reactions to our questions, while other people in the marketplace shied away from the questions that we were asking. They were open and honest about what they knew and what they didn't, and we moved forward on that basis. And here we are, two and a half years later, with a machine.'

The E100 demanded a high performance servo hydraulic system, which is very in line with Moog's expertise. So what Moog brought to the table included:

Thompson and Moog were clearly the key drivers of the E100 project, but the programme itself was a triumph of collaboration between several parties. The list of partners included:

It's clear that Moog's experience and expertise in project management, design, development, manufacture, installation and support services have all contributed to the success of the project. But the company's own practical capabilities in the friction welding process - as well as in high performance servo hydraulic control, high performance hydraulic actuators and the provision of large scale hydraulic power plant and distribution systems - are second to none. Moog's own presentation on the project 'recipe' underlines the technical scope of the project: 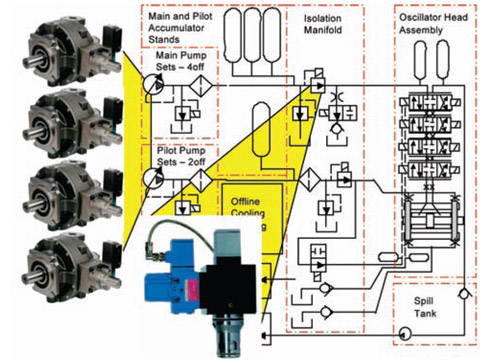 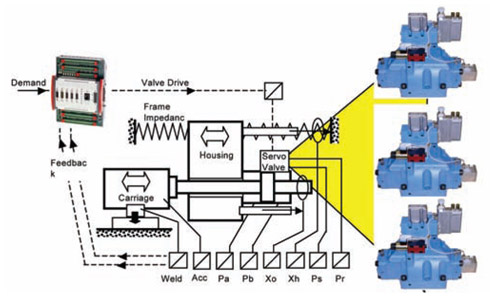 Meaning that four valves would deliver a total flow rate of 6,000 lpm and add the squeezing force of two hydraulic actuators .Connect it all together with a sophisticated pipework and manifold installation, then the intelligence of three Moog Servo Controllers (MSC controllers) and near to 100 sensors. Bind together with the know-how of Moog application expertise, bake for five seconds at 2,000,000 watts and let cool. Repeat for another 50,000,000 cycles.'

Alan Shilton explained, "People expect to see one single tool or machine when we talk about it. In fact it's a facility, not just a machine. Its 100 tonnes capacity (110 ton US or 220,000 lb) and two and a half metres height (8ft 2½ inch) means that it's huge compared to previous existing machines (just 70 tonnes, 77 ton US or 154,000 lb) so this is much larger and everything else that goes with it has that sort of scale. That was our intention from day one - it's not something that has just come about. We set off knowing that it was to be the largest and most flexible machine ever built. We are very close to making our first weld, which will be a titanium product to start with. We'll begin with a qualifying programme, and then we will put it through its paces - from the very small through to very large (100 tonne) jobs. The smallest is 800 mm2 (1.25 sq. in.), and the largest surface area that we are able to weld is 10,000 mm2 (15.5 sq in)"

'It's a development project, the net result of which is the production of a machine. Throughout the process, Moog has been very accommodating in terms of delivering what we requested of them. We had broad criteria because we set some ground rules at the start, and we had all the tooling, special frequencies of amplitude we wanted the machine to perform at. We depended on Moog to deliver that end result, and they have not been found wanting. It became more of a partnership as each stage progressed; the senior people are fully aware of what we are doing in the marketplace because we keep them informed. They know where our plans and aspirations lie in relation to the marketplace. We are not just in jet engine manufacture - we have come up with a number of novel ideas for using linear welding as a process.'

One of the key motivators is the belief that the E100 machine will alter the way in which jet engines are manufactured, he said. 'It will be five to ten years down the line, because in the aircraft industry you have to look a little further ahead than in, say, the automotive industry. That's one of the things we have learned along the way: new processes need to be maturated, you need to be comfortable with the process.'

He concluded: 'We have had some exciting and interesting times but it's always been great. We already have two orders to work on, on a machine that's not yet been finished, which confirms our belief that the marketplace is ready. It's all very exciting. We hope it's something that will change this business out of all recognition and put us in a prominent position for attacking the worldwide market, not just the UK. And we'll be hand in hand with Moog all the way.'

With more than 550 machines supplied worldwide, Thompson is the technology partner of choice and has established an enviable track record of bringing friction welding process innovations to market. Further information about Thompson Friction Welding is available here: www.thompson-friction-welding.co.uk

Thompson has been awarded a Queen’s Award for Enterprise 2009: Britain’s most prestigious Awards for business performance. Thompson also won a Boeing Performance Excellence Award for 2008.