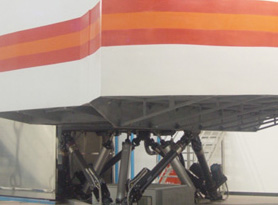 The expanding rail transit network within China requires more and more trained drivers. Subway companies face a daunting challenge: How to put these drivers through pre-job safety driving training in the most effective way. Since the construction and operation of China’s very first subway line in Beijing in the 1960s, train driving simulators have been used in driving training to perform simple simulations such as the simulation of a static cabin and the audio and visual environment of a train in motion. These applications were limited as they did not provide real dynamic simulation.

This project between Tongji University and Beijing Subway, the end user, involves the very first subway train driving simulator to incorporate a motion base system. Both parties had high expectations and laid down stringent project specifications concerning the floor space needed, technical requirements, simulation performance, power consumption, level of control and reliability of the motion base system.

Moog supplied a 6 DOF motion base system including a hexapod base and a control cabinet (controller and control software) for integration into the simulator by Tongji University.

Moog’s 6 DOF Motion Base system gives a driver true feel of the motion changes of a train in real-time due to the integration of some key technology:

Moreover, the integrated control hardware and software enables both the acquisition of motion data from the motion base and ability to execute on-line changes of position instructions to the motion base. The motion base gives the true feeling of motion to a driver in the cabin who in turn controls the cab motion, forming a human-in-the loop (H2IL) driving training simulation, one of the most sophisticated kinds of simulation available today.

Another strength of Moog’s 6 DOF motion system is its all-electric technology. As a long time manufacturer of hydraulic motion bases, Moog has also become the leader in designing the latest electric versions that meet even the most stringent performance requirements. Compared to conventional hydraulic motion systems, the Moog electric system is:

The unique design of Moog’s hexapod-based system takes up half the space of conventional hydraulic motion bases, saving on valuable simulated driving lab space and reducing overall facilities costs. Moog’s proprietary motion control software is recognized in the industry and market as the best-in-class in terms of smooth performance and realistic feel of motion. 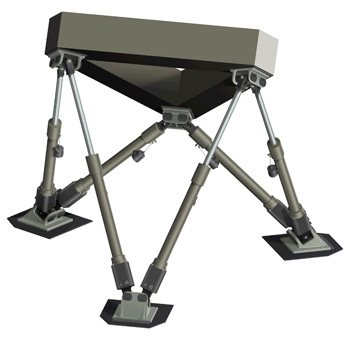 Throughout the simulation integration, Moog put in place a dedicated Euro-China technical team, which helped Tongji University install and operate the motion base system in the early project phase. Moog software engineers also  performed software testing, user training and technical support at the end user site in the later phase.

“This is the very first time we are undertaking such a complex project, which also happens to be a top-end train simulator project. To ensure success, we demand very high fidelity of the motion base system. It must be capable of effecting motion accurately and offer flexibly to give drivers the most realistic driving feel so as to maximize training effectiveness,” said Mr. Xitang Tan, project leader of Tongji University. “Besides high fidelity, Moog’s motion base system also has outstanding power consumption and operating noise characteristics.”

“The customer selected us because of holistic considerations of our product reliability, technical maturity, performance and other factors,” Tom Pierce, Moog summed up the competitive advantage of Moog’s motion bases.

“The simulated train motion feels good. It’s very realistic and the car is quiet” – this acclaim from a veteran driver certainly puts a smile on the face of the Moog team. The Moog technical team, together with the Tongji University as the integrator and Beijing Subway as the end user, completed the final simulation drive model and parameter testing after two years. The train driving simulator is now officially used in pre-job training of drivers on the Beijing Subway line 1.

“The success of this project opens up a new frontier for us to clinch new orders and grow our partnership with Moog,” declared Mr. Xitang Tan, Project leader of Tongji University.

Moog’s 6 DOF motion base has captured 85% to 90% of the international simulation market, including the aerospace, automobile and rail car sectors. The Beijing Subway project is Moog’s first sale of driving simulation motion base for rail transit within China. Building on the success of this project, we are now actively discussing with some other integrators on partnerships to grow the rail transit driving simulation market in China.

Bai Yuan is responsible for Sales in the Test and Simulation market, based in Beijing, China. He has 8 years experience in this marketplace including 5 years with Moog. He has a Bachelor of Engineering from Beijing University of Aeronautics and Astronautics.