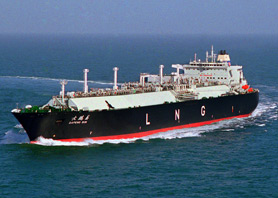 Natural gas is viewed as the cleanest fuel when compared to other fossil fuels due to the reason that it contains very little sulfur content. Today natural gas constitutes 25% of the total fuel consumed over the world and the percentage is increasing every day. When you turn on a gas stove, you can recognize that you are burning natural gas from its pure blue flare. However you might not know that the natural gas you are using could be transported with a Liquefied Natural Gas (LNG) carrier from the other side of the world.

﻿﻿﻿Natural gas from offshore oil/gas wells is typically very difficult to be directly utilized and then transported and pumped into urban gas networks. The LNG carrier plays a key role between the producer and consumer.  Natural gas needs to be cooled down to a super low temperature -162°C (-260 °F), and its volume will be reduced to 1/600th of its original gaseous state. It will then become Liquefied Natural Gas (LNG) – now small enough to be transported and stored.

Huge tanks in LNG carriers need to be kept at a super low temperature for weeks or months during its transportation journey. The tanks, which are typically 125,000m3 (4,414,000 ft3) each in volume, are difficult to build due to their extreme volume and “super cool” requirements. Also the thin [0.7 mm-1.5 mm (0.028-.059 in)] welded Invar stainless alloy membrane structure which holds the LNG has to have the right properties including reliability in -162 °C (-260 °F) temperatures, and no leakage over the carrier’s lifetime of 40 years.

Dr. Sam Fan, structural research lab director of Marine Design and Research Institute of China (MARIC) was assigned the challenging assignment of investigating the structural strength and properties for the LNG tank to give help to the ship building industry. He needed a system to perform “slosh testing” on LNG tanks which simulates the motion of the carrier and allows researchers to study the impact of the slosh on the structure of the scaled LNG tank model.

Dr. Fan had difficulty finding a workable solution for this test challenge but in late 2009 he contacted Moog. Yuan Bai, the Simulation Sales Manager for Moog in China, immediately visited MARIC to introduce Moog’s 6 Degree-of-Freedom (DOF) 4.5 Ton motion base. 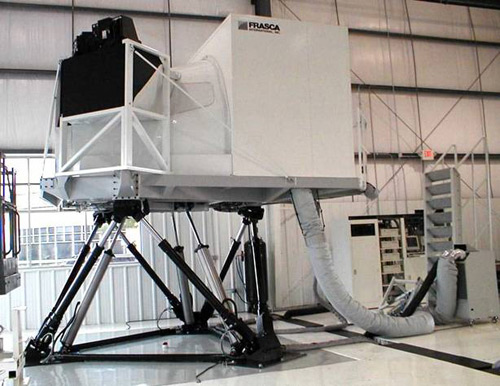 It was clear that the requirements and specifications for this application required a modification to the motion system.

The major challenges that required addressing with this solution included:

The Moog in China team immediately discussed the requirements for this specialized motion system with the R&D center in Moog, Nieuw Vennep, Netherlands (NV). Oliver Voinot, Test System Engineer Manager, performed an analysis and determined that the Moog motion base's performance could be extended with certain system reinforcements and modifications:

A working team between Moog in The Netherlands, Moog in China and Dr. Fan's team has been collaborating throughout the whole project. Karlijne van Leibergen and Jason Guan, Project Managers from the two Moog sites worked closely to ensure the system was designed and built per specifications and to achieve Dr. Fan's requirements for slosh testing. The system was delivered in July 2010 and SAT was completed successfully on 4 July 2010.

A few factors that contributed to the success of this project include:

"The slosh testing motion system provides us with a powerful simulation tool to deeply understand the structure strength and nature of the LNG tanks. Our research will definitely provide a solid foundation to the LNG ship building in China," Dr. Fan commented.

In light of the success of the slosh test system, MARIC continues its cooperation with Moog. A second motion system is on its way and we all are looking forward to the enxt exciting project with MARIC. "Success is the mother of success" – this is what we believe now.

Jason Yang, Test Application Manager Moog China
Jason has been Test Application Manager since 2008. He joined Moog Singapore in 2000 as an application engineer in plastic machinery. Jason was heavily involved in Electro- Mechanical actuation development from 2002 to 2004 in Moog in the US engineering and EM Business Development in China from 2004 to 2006. Jason also assumed the Automotive Sales Manager position from 2006 to 2008 in China. Jason holds an Electronics and Applied Control Theory Master Degree from China and also an MBA degree from St. Bonaventure University, USA. Jason has been in application engineering for more than 10 years at Moog.