In recent years there has been a strong trend towards undertaking the initial stages of processing of oil and gas products on the sea-bed, rather than after transfer to the surface. Driving this revolution is a complex mix of environmental and commercial considerations.

Traditionally subsea oil and gas reserves were brought to the surface for processing, either on land, on a fixed platform or Floating Production, Storage and Off-loading unit (FPSO). This is an inherently inefficient process as the useful oil and gas components are a comparatively small proportion of the volume of material transported. Disposing of the unwanted elements brought to the surface - primarily sand and water - can also present a challenge, particularly as the waste water can contain small traces of potentially harmful hydrocarbons. 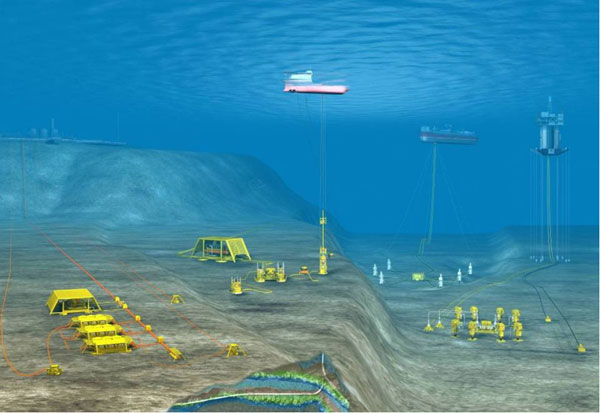 With the advent of subsea processing in the last decade or so the oil, gas, sand and water emerging from the well are separated at the sea-bed with only the useful oil and gas elements being transported to the surface. The bulk of the waste components can be ‘re-injected’ into the reservoir, boosting the reservoir pressure, giving a faster production rate. The re-injection process can also dramatically increase the percentage of oil and gas that can be recovered from a given reserve.

Subsea processing requires the remote actuation of a number of process control valves controlling fluid switching and control of flow-rate and pressure. Traditionally these valves have been remotely actuated by means of a high pressure hydraulic system. This approach utilizes either hydraulic cylinders or rotary actuators to move the linear or rotary control elements in the process valve to achieve the desired fluid flow or pressure.

A major drawback with hydraulic actuation is the complexity, inefficiency and cost of the hydraulic power supply system. Usually located at the surface, the hydraulic supply can be situated up to 100+ km (62+ miles) remote from the subsea installation. Inherent in this approach is the use of two custom designed hydraulic hoses for both high pressure supply and low pressure return. These hoses represent a major infrastructure investment causing power losses and are potentially vulnerable to damage.

Electric actuation technology is still in its infancy, but promises to dominate the market in the future because of some key advantages, namely:

The FMC Anti-Surge ValveFMC Technologies is the pre-eminent company in many aspects of subsea engineering, technology and project execution. In addition to subsea production systems comprising subsea trees, controls, manifolds and connection systems, FMC is also heavily involved in Improved Oil Recovery (IOR) technologies such as subsea processing, boosting and gas compression. This involvement also includes the qualification of new technologies such as Anti-Surge Valves for gas compression systems.

The project under consideration is the supply of an “Anti-Surge Valve” for a Subsea Gas compressor used to convey gas, and a limited amount of oil, to the surface.

The Anti-Surge Valve continually modulates the differential pressure across the compressor during start-up and normal running. It does this in response to position control inputs generated by a complex algorithm using inputs from multiple pressure, flow and temperature transducers. However the Anti-Surge Valve also has a safety function to protect the compressor from damage from pressure surges, by opening a bypass path between the input and output of the compressor. 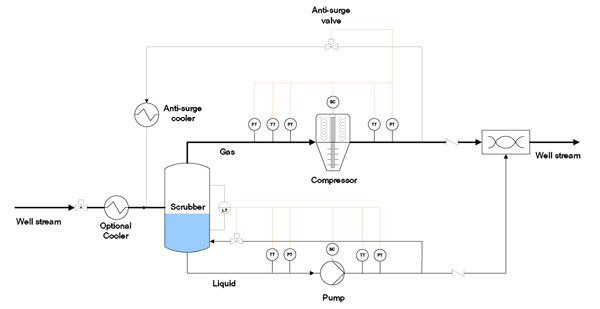 Moog was chosen to supply the complete electric actuation system, including control electronics, for this highly dynamic subsea process valve. For Moog the key challenge was to engineer a very high performance actuation that could function with ultra-high reliability up to 2,500 m (8,200 ft) below the surface of the ocean.

Moog has been providing custom actuation products for the ‘down-hole’ drilling industry for over 20 years and utilized many aspects of this experience in this project. 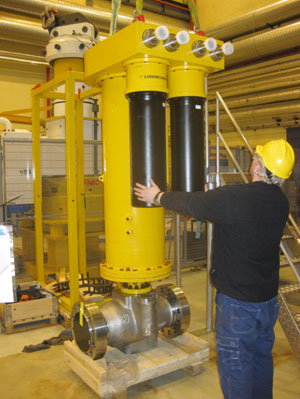 The prime mover of the actuator is a Moog duplex-redundant brushless motor. In order to achieve the ultimate in reliability this utilizes twin rotors, twin position sensors and two independent sets of control electronics (The electronics are each mounted in a separate housing maintained at a pressure of 1 atmosphere). To allow operation immersed in oil at the very high ambient pressures on the sea-bed, Moog employed special motor winding techniques, bearings, insulation materials as well as custom rotor design.

To convert the rotary motion of the motor to the high-force [30 KN (6,760 lbf)] linear motion required the use of a precision “ball-screw actuator”. This long-life unit was specially developed for the application by Moog who have their own design and production center for ball-screws and roller-screws located near Milan, Italy.

A further design challenge for Moog was the dual functionality of the Anti-Surge Valve. Firstly the actuator was required to modulate at high speed while maintaining high positional accuracy. The second requirement was tofully open the valve extremely quickly (circa 2.0 seconds) to prevent compressor damage, in the event of a malfunction elsewhere in the control system.

To address this problem Moog turned to their unique, patented, ‘fail-safe’ system which is well established for turbine control in the power generation industry.

This arrangement uses a conventional fail-safe spring override to power the Anti-Surge Valve to the ‘fully open’ system in the event of a system problem. However, the novel part of the design is a ‘toggle’ mechanism which holds the spring in its fully compressed position during normal operation. This toggle is held in position by a mechanical toggle, latched by a low-power electrical solenoid.  In the event of a system failure the solenoid is de-energized, releasing the latch and the spring extends fully opening the anti-surge valve.

Because the spring is not continually compressed and released during normal operation, the actuator can be designed with 50% of the power output normally required.  Since it only has to overcome the operating forces of the valve not the combined force of the valve and the fail-safe spring.

Outcome and conclusions for the future

One of the key requirements for successful subsea equipment use is extreme reliability, as maintenance is very difficult and prohibitively expensive. To conduct a comprehensive test program, two prototype anti-surge valves were produced:  one for life-testing at Moog and a second for hyperbaric testing at FMC. To summarize the successfully completed test program: 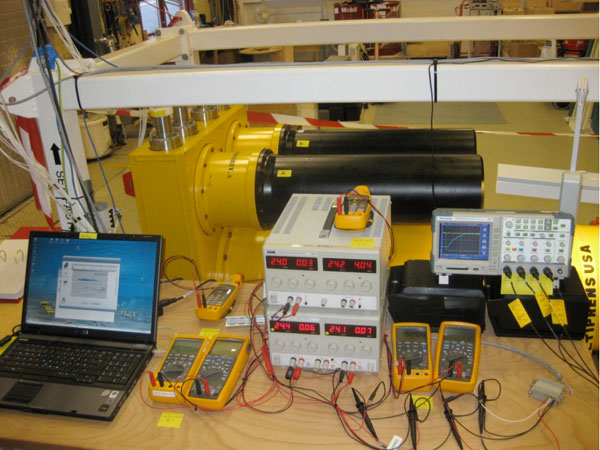 The Anti-Surge Valve under test at FMC

This test program which far exceeded the normal operational duty cycle for an anti-surge valve, proved the high performance and extreme durability of the design. The completion of this successful development by FMC and Moog demonstrates that even the most critical processes on the seabed can be remotely controlled via electric actuation. Over the next decade a dramatic increase in subsea processing activity is predicted. Playing a major part in this will be this new electric actuation technology with its inherent advantages for this challenging new frontier.

Martin S. Jones is responsible for the Motorsport business around the world and is also the Market Manager for Niche and Emerging Markets in Europe.  He has worked for Moog for 30 years in sales and applications engineering for a range of industries including mobile equipment, marine and offshore, blow molding and rolling mills. He studied Physics and Economics at the University of East Anglia.