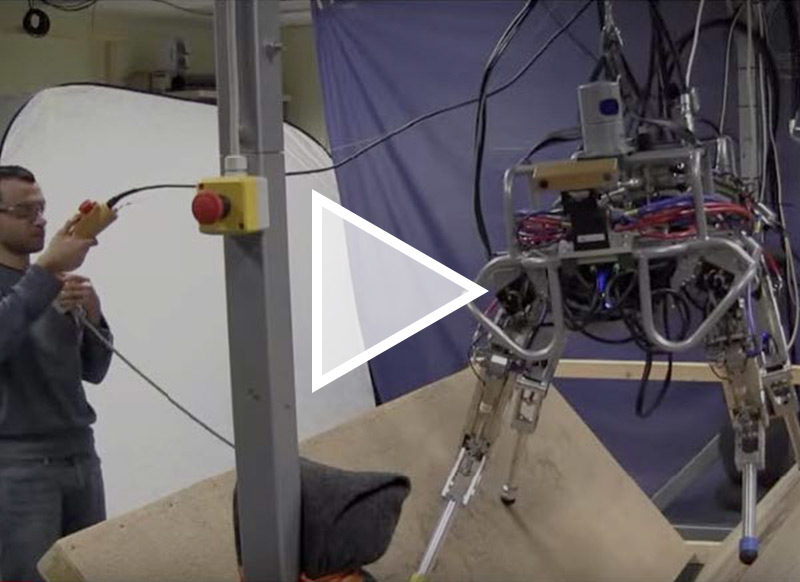 Watch a video of the HyQ Quadruped Robot

After more than eight years of work, researchers at the Istituto Italiano di Tecnologia (IIT) are bringing to life advanced robotics with the help of hydraulic actuation. The “HyQ” or “Hydraulically actuated Quadruped” was created to assist humans in response to emergencies and search and rescue operations in dangerous areas.

“The project, which started in 2007, represents an important innovation in the field of bio-inspired robotics and has the ambitious goal of creating a highly versatile robot, capable of moving around on its four legs with agility, even over rough terrain, overcoming the obvious limitations of tracked robots being used up to now,” explains Claudio Semini, project leader engineer of the Advanced Robotics Department of the IIT. “For this reason we chose the hydraulic solution for HyQ over the electric one, as it guarantees us higher performance and power and strength of the legs.” (See Figure 1.) 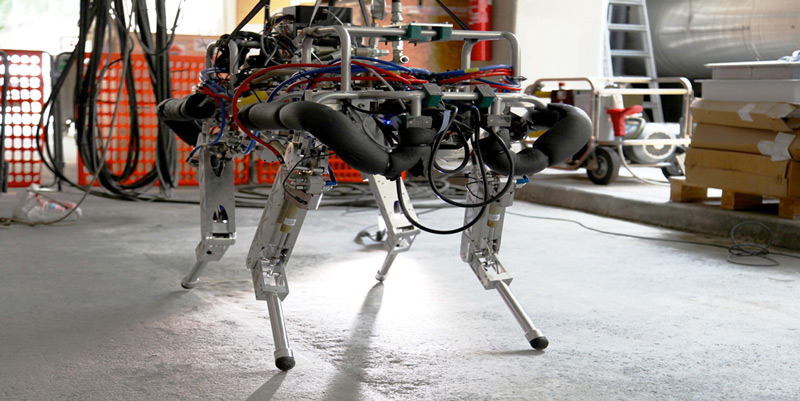 Figure 1: The HyQ Quadruped Robot represents a complex engineering project:
A robot able to plan its own movements and correct its steps in real time.
Courtesy of: Agnese Abrusci (IIT)

Why Did the Researchers Use Miniature Servo Valves?

The concept of “actively compliant” legs was a key element in the development of HyQ made possible by the extremely high response of the Moog EO24-LA miniature hydraulic Servo Valves to control leg motion. The ability of the Moog Servo Valves to react rapidly when the legs hit the ground, enabled precise reactive control of the rigidity/elasticity of the limbs, absorbing the shock of impact, and preventing stress and damage to the central body. (See Figure 2.) Moog’s Miniature Valves fully met the researchers’ need for robust, reliable, ultra-compact hydraulic servo valves capable precise control in milliseconds. 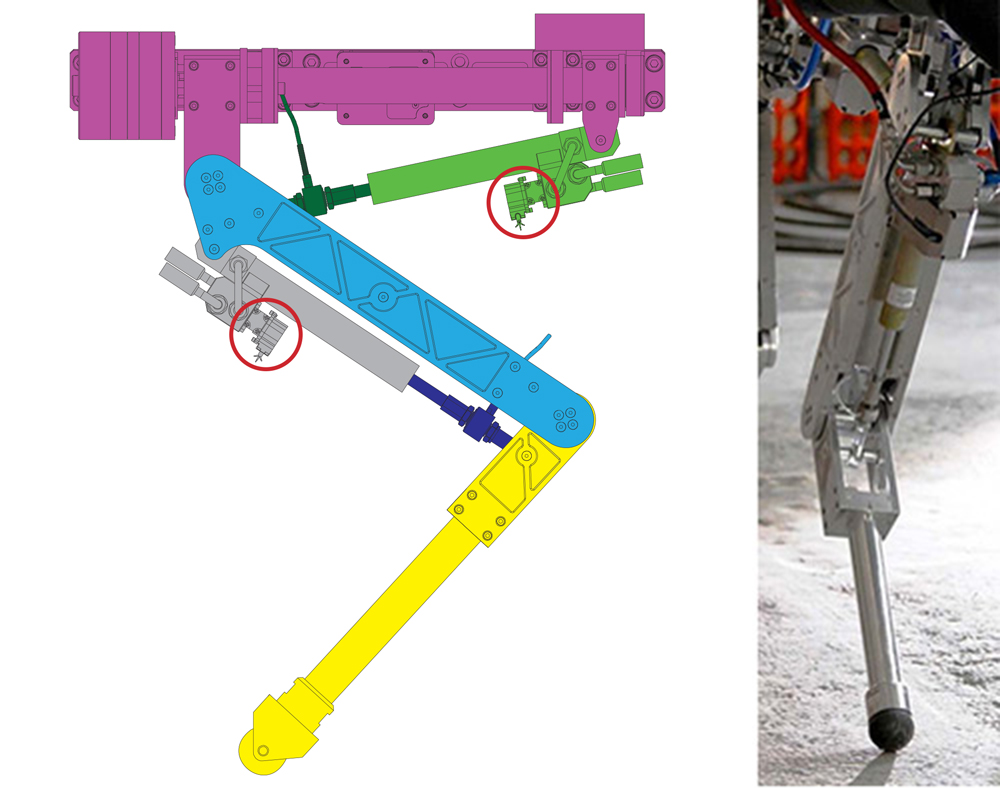 Figure 2: The location of the Moog E024 Servo Valve on the leg actuator of the
HyQ Quadruped Robot and actual “leg” of robot.
Courtesy of: Agnese Abrusci (IIT)

The HyQ robot is an example of a complex engineering project made up of mechanical, hydraulic and IT elements and the results to date have been called remarkable by experts in the industry. This robot can jump or walk on a rocky trail, move along a corridor with V-shaped slanted sides, run at different speeds (up to 2 m/s/ 4.5 mph), and adjust its speed in response to different environments. The installation of a perception system and an inertial measurement unit (IMU) enable the robot to plan its own movements based on a map of the surrounding environment, and correct its steps—in real time—while always maintaining its predetermined posture. HyQ is also one of the few robots capable of doing the “flying trot,” where all four legs leave the ground simultaneously. See video here.

Ongoing cooperation with the IIT Research Team in the development of the quadruped robot represents an important opportunity for Moog’s engineers to create and apply specific and highly innovative motion control solutions, such as miniaturized systems and components, which are used in high performance applications from robots to Formula 1.

“We are very proud of the enormous progress we have made, but our work is not finished yet,” Semini says. “HyQ currently is almost one metre long (3.28 ft) and weighs about 80 kg (176.3 lbs), and we are still working on the power source system, currently managed through an external unit, in an effort to mount it directly on board, even though it will increase the weight. We are trying to set up new partnerships with companies like Moog that are capable of meeting our needs for components that are smaller and lighter, yet high performance.”

The Moog E024 Servo Valve was developed a decade ago specifically for use on Formula 1 racing cars and is part of Moog’s comprehensive range of miniature hydraulics components, including actuators (See Figure 3.) For more information on Moog E024 Servo Valves, see the chart in Figure 4 at the end of this article. 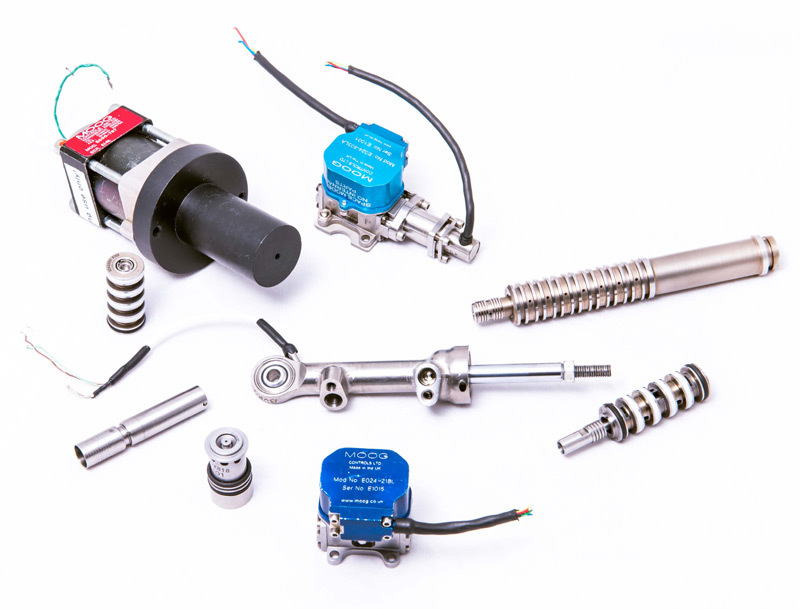 F1 racing cars widely use hydraulic rather than electric actuation for their “on-car” control systems. Hydraulics technology, traditionally associated with slow, heavy industrial applications, might at first sight seem a strange choice for such a sophisticated lightweight application. However, hydraulics still has a fundamental advantage over other power transmission methods. Namely, its high “power density,” whether judged on weight or space envelope. It’s no coincidence that Formula 1 racing cars make extensive use of miniature hydraulics, where designers are focused on eliminating every gram of unnecessary mass to optimize car performance.

In fact, a strong parallel can be drawn between autonomous robots and F1, since in both applications the mass of the energy source and power generator used for propulsion is an integral part of the payload. Additionally both machines have multiple axes of control with unpredictable duty cycles requiring high peak power levels when the occasion demands. For example, the robot jumping or correcting a loss of balance, and the F1 racing car changing gear in a few milliseconds or correcting the loss of control in a skid.

Since the first miniature valves were developed a decade ago, Moog’s family of miniature products have been used in a wide range of applications including:

More information on the robot HyQ.

Martin S. Jones is responsible for the Moog Motorsport business around the world. He has worked for
Moog for more than 30 years in sales and applications engineering for a range of industries including mobile equipment, marine and offshore, blow molding, and rolling mills. He studied physics and economics at the University of East Anglia.

Istituto Italiano di Tecnologia is a private Foundation jointly established by the Ministry of Education, University and Research; and the Ministry of Economy and Finance. Its aim is to promote excellence in both basic and applied research and to facilitate the development of the Italian economy at the national level. IIT’s staff includes 1,250 personnel. The scientific area accounts for about 85% of personnel, 44% of which is from abroad: 27% are scientists from more than 50 countries and 17% are Italian researchers who have come back to Italy after a professional experience abroad.