Putting Servo Valves Back to Work

As appeared in Valve Magazine on 12 February 2018.

Industries as varied as paper production, steelmaking and power generation rely on servo valves for precise motion control. A servo valve can last well above one billion cycles. But achieving this kind of longevity only happens when selecting the right manufacturing techniques, mechanical designs and maintenance approach.

Paper mills, for example, use hydraulic pistons placed inside a roll to exert forces at each load zone to maintain a controlled profile across the complete width of the roll. The force exerted by each piston is controlled by a pQ (pressure and flow) servo valve that controls the position and pressure on these rolls as paper runs almost continuously through the machine shift after shift, day after day. If even one spot on a roll causes a variation in pressure or position, the paper can slide or rip causing a stoppage that can shred the paper into confetti. In a recent example we found, the customized servo valves running a paper mill’s calender rolls weren’t able to consistently control the pressure on its paper because routine repairs (by an un-authorized repair house) had not restored the valves to original condition.

A look at steel mills reveals that these operations can have problems maintaining hydraulic system pressure on gauge lines if plant managers do not adhere to servovalve leakage specifications. One steel mill we learned about had a robust HPU system, with three, 33-percent capacity pumps and a fourth pump in reserve. But as its pressure situation worsened, the mill began operating its reserve pump, consuming additional electricity and operating without a spare pump. At the same time, the pressures were declining and the fluid temperatures were increasing. The cause: The servo valves had not received a factory repair in many years. Instead, an unauthorized repair house (URH) had repaired the valves. The root cause of the steel mill’s problem was leakage through the servo valves caused by worn lands between the bushing and the spool. Typically, a URH cannot purchase replacement parts from an OEM and will reuse worn parts as long as the valve is deemed “functional.”

In the case of the steel mill, the severe leakage explained the higher flow needed to maintain system pressure and the increased temperature as the hot oil was prematurely returned to the sump. The internal leakage of the valve was eight times greater than recommended. After inspection, technicians learned that some of the spools were neither made by the OEM nor manufactured to the correct tolerances. 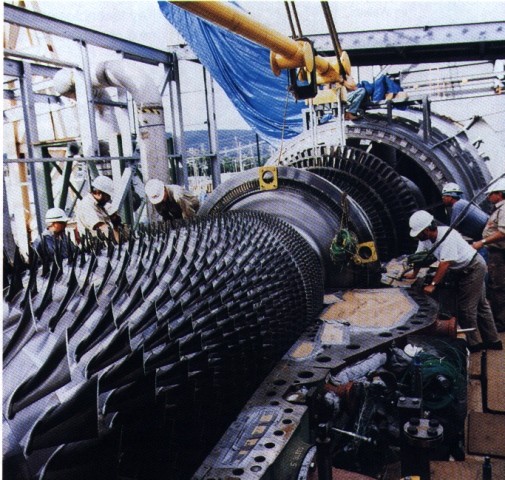 An industrial gas turbine during a major inspection event, including scheduled maintenance of servo valves

Turbines at power plants are demanding applications for actuators and servo valves because motion control is the key to machine performance and safety. Gas and steam turbines use rugged inlet guide vane actuators and fuel gas control valves to regulate the correct ratio of air and fuel in varying loads and ambient environments for efficiency and minimal emissions. For the turbine system, the fuel gas control valve on an actuator is the primary interface between a complex control system and the mechanical part of the plant. Maintaining that link is a linchpin for producing power. A site inspection of the turbines at one power plant showed varnishing of the hydraulic system. A simple cotton swab during the disassembly process revealed loose varnish within the manifold and actuator. Inspection of the process valve revealed internal leakage and carbon deposits on the plug and stem. An inspection of the actuators indicated the beginning of a hydraulic leak, which the site maintenance manager hadn’t predicted. While performing little to no scheduled maintenance will generate short-term savings, the cost to restore failed components to “as new” condition can be significantly more expensive than the interim steps in a well-constructed, preventative maintenance program.”

Whether a valve (and the equipment it supports) fails due to insufficient repairs, leakage or carbon deposits, there are solutions. Here are five things to consider for your application:

Keep fluid clean.  For companies that invest in servo control components, the servo valve is key to either the speed or position (or both) of the most critical axes on the machine; companies must keep servo valves running in severe environments including high temperatures and 24/7 operations. ISO standard 4406 measures cleanliness as the quantity of particles at different sizes in fluid. There are two ISO 4406 cleanliness standards for servo valves. The first, 14/11 (ISO 4406:1987) or 17/14/11 (ISO 4406:1999), allows the valve to function as designed with an “average” wear rate. The second standard – offering extended life and performance – is: 13/10 (ISO 4406:1987) or 16/13/10 (ISO 4406:1999).

Monitor your system with predictive maintenance. Many companies monitor servo valve performance by recording the amount of current it typically takes to hold the actuator or system mid-stroke or at null. For example, a 10-milliamp (mA) valve might operate at 5 mA to hold position at null in a closed-loop system. The limit could be +/- 1.5 mA. If the current passes over the established threshold, then check the valve or system for contamination in the servo valve or friction in the actuator and/or system.

Reduce servo valve sprawl; one model for all machines. Many companies reduce downtime and lower costs for their machines by reducing the number of servo valve models from different vendors. Some servo valve makers even offer a trade-in program. The benefits of this approach include eliminating obsolete valves, which makes repair programs easier.

Think twice when considering a URH. A URH might win your business by comparing the repair price per valve with that of an OEM, but the repeat maintenance cost added to a URH’s price makes it more economical to have the OEM service your servo valve. URH-repaired valves typically last between six and 12 months until a plant manager will see an unstable production platform caused by early fatigue in the valve.

Regularly evaluate performance to pinpoint repairs before failure. In 2017, Moog launched its Return-To-Productivity Program to help maintenance managers in the Americas evaluate and refurbish their older, or even obsolete, valves. As part of the program, even if a maintenance manager has a Moog valve that turns out to be obsolete, Moog will clean the valve, evaluate its condition and provide users with an inspection report describing the health of the valve as well as recommendations for potentially replacing it. If, for example, technicians see valves come back with worn spools caused by repeated contamination or a cracked flexure sleeve, they will identify what’s wrong with the system and even recommend a system-wide solution.

Turning to an OEM to affect repairs or service equipment is a logical step. But some maintenance managers do just the opposite because they believe asking the OEM to repair a piece of equipment will break their budget. The viewpoint of some maintenance professionals is that if they turn to an unauthorized repair house, or even bypass an expensive repair altogether, they’ll save money. The facts are just the opposite.

Christopher Valiquette is the North American sales manager for Moog Inc. He received his bachelor’s degree in business administration from the University at Buffalo and a master’s degree in business administration from St. Bonaventure University. He is a certified fluid power specialist and a member of the International Fluid Power Society with more than 20 years of experience working with hydraulic fluid products and applications.

As appeared in Valve Magazine on 12 February 2018.