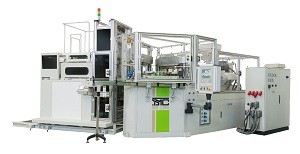 Read about an innovative motion control application with Moog and SMC Corp., one of Thailand’s largest makers of extrusion and injection blow molding (IBM) machines in a recent issue of Blow Molding Magazine. Moog helped SMC upgrade its machines from hydraulic to electric power and the customer realized energy savings, better accuracy and repeatability, shorter cycle times and easier maintenance.

AS UTILITY BILLS  go up, the light bulb has gone off for machinery OEMs interested in providing their customers with greater energy efficiency. SMC Corp., one of Thailand’s largest makers of extrusion and injection blow molding (IBM) machines, is no exception.

With the help of an international motor manufacturer, SMC has been working to upgrade its IBM machines from hydraulic power to electric.

“The transition of hydraulics to electric is a trend,” said Jeremy Lee, entity manager for Moog Singapore, a maker of high-performance motion-control packages that has partnered with SMC. “For those who can do a full transition, they will see a lot of benefit.”

By working with Moog to successfully implement the technology transition of the IBMs from hydraulic to electric motors, SMC has improved its machines’ energy efficiency. For example, SMC analyzed the energy consumption of its machines and found that machines fitted with Moog servo motors were drawing, on average, 40.5 kilowatt hours (kWh), whereas the hydraulically powered units previously in use were consuming 48.52 kWh. Also, the machines are cleaner and easier to maintain, and they perform with better accuracy and repeatability, providing for shorter cycle times.

SMC worked with Moog for about a month to install the state-of-the-art hybrid-electric actuation systems on the machines, which are used for blowing small containers such as pill bottles, eyedropper bottles and deodorant bottles. Depending upon the technical expertise at an OEM’s disposal, the process can take as long as several months. Moog also works with local machine retrofitters to do in-plant redesigns, Lee said.

Lee described the process as a journey of learning for the OEM, with a curve that requires an influx of expertise. For example, moving from a 10-kilowatt (kW) hydraulic motor to a 10-kW electric motor requires examining the gearbox, making changes to wiring and tuning the motor to achieve optimal performance.

Taking account of factors such as the machines’ inertia ratio, motion profile, duty cycle, root mean square torque and gear ratio, Moog engineers helped to size and select servo motors and servo drives from their company that were appropriate for the project, and they integrated
them with Moog’s machine controllers.

First up was SMC’s 135IB IBM, a large machine with about 135 tons of clamping force. Moog engineers evaluated its mechanical turntable and offered suggestions; SMC then replaced the hydraulic motor that operated the turntable with a Moog electric servo motor.

After completing the 135IB project, SMC decided in 2016 to upgrade the turntables of its smaller 85IB and 65IB, which have clamping forces of about 99 tons and 63 tons, respectively. For them, SMC selected Moog’s new-generation modular machine controller MC-series 600, which provides closed-loop control for all the machine axes.

“With the new MC-series 600 controller, operating the machine is easier and more intuitive with a touch-screen interface,” said Prasit Painok, the head of SMC’s technical service team. “As for servicing the machine, one operator can conveniently service the machine, instead of the two operators it took for our older model IB.”

And for the IBM machine maker, the journey continues — this year, SMC is exploring the possibility of integrating Moog’s parison electromechanical actuators to handle parison axes and Moog’s motors to handle the rest of the axes.