The Industrial Group of Moog Inc. declared Feng Liu, technical supervisor for Tianjin Dian Auto Parts Co., Ltd., the winner of its contest to find China’s oldest operating Moog servo valve after he sent in a video showing conveying equipment running with a Moog Servo valve manufactured in 1985. Moog launched the contest last May as part of a celebration of the 20th Anniversary of Moog’s operations in China.

“It’s an honor to have won the award for having the oldest, operating Moog valve in China,” said Mr. Liu. “We thought using Moog’s products with our application would greatly improve our work efficiency, and it has.

The winning servo valve is part of the auto parts maker’s on-site refueling equipment. Since 1985, the company says it has never had a technical problem with the valve.

“Congratulations to Mr. Liu for finding China’s oldest operating Moog servo valve; his award proves the claims we make about servo valve reliability and dependability,” said Pat Roche, President of Moog Industrial Group. “The automotive sector is just one of the industries in which you find our valves in use; others include power generation, steelmaking and paper mills.”

Pat announced that the second-place winner was Weiming Zhou from Bao Steel who produced evidence of a D631 Moog Valve manufactured in 1987 running on an automated gauge control system in Shanghai. The third-place award went to Chengzhou Wu who is also with Bao Steel; the third-place valve is a Moog D073 Series servo valve running on a cold rolling mill press machine, producing 2,030-mm strip steel. The winning prize is an Jingdong Voucher for ￥3000.

In 1951 William C. Moog, Jr., developed the first commercially viable servo valve. Servo valves transform a digital or analog signal into a hydraulic output such as flow or pressure. 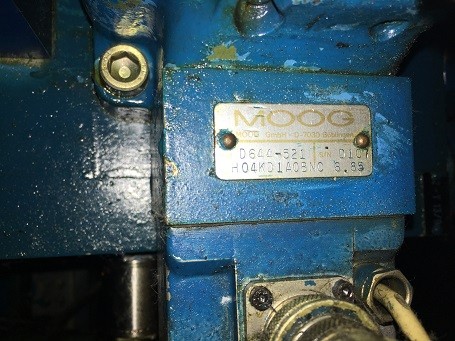